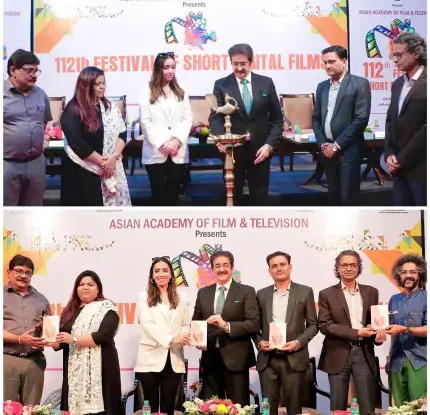 Noida: That’s the beauty of short films; their strength lies in delivering a message creatively and simply. Short films are the representation of your passion, your education and training, your aesthetic sense and power to tell story,” said Dr. Sandeep Marwah President of Asian Academy of Film and Television on the inauguration of 112th AAFT Festival of Short Digital Films at Marwah Studios, Film City Noida in house full auditorium.

“Let me congratulate the whole team of AAFT for conducting this beautiful festival and breaking our own international record of presenting 112th edition of festival this time. This is the only festival in the World which has touched 112th edition and showcasing debut films of the directors,” added Dr. Marwah anxiously waiting for the screening of films.

“It is age of short films. You can deliver the message in just few minutes. It is my privilege to get associated with this festival and AAFT. I am also thankful to Sandeep Marwah for releasing my book ‘Empowering You Beyond Birthing’ which is my second creation. I would love to come back and be a part of AAFT School of Health and Management and interact with the students. My heartiest congratulations to young film makers for an excellent presentation,” said Mahima Bakshi a well-known Maternity Coach and activist.

Film Maker Sadaf Rizvi appreciated the vision of AAFT and the hard work of faculty who have trained these film makers so well that they have been able to deliver a film in such a short period of time. She offered to share her vast knowledge with students in coming batches.

The program was followed by screening of films and question answer session. Dr. Marwah presented Life Membership of International Film and Television Research Centre & Film Club to the dignities. The event was supported by International Chamber of Media and Entertainment Industry, Asian Unity Alliance & World Peace Development and Research Foundation. 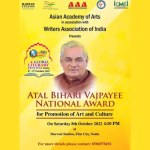 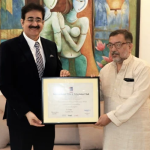