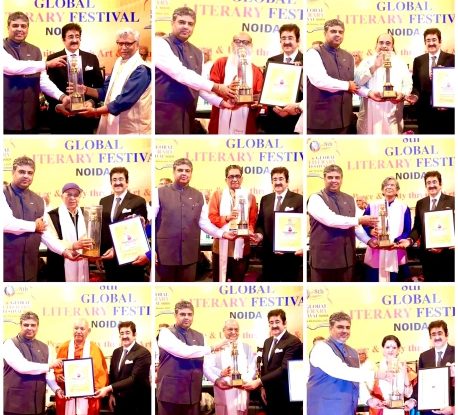 Noida: The felicitation ceremony of “5th Atal Bihari Vajpayee National Award for promotion of Art and Culture” was conducted by Asian Academy of Arts on the final day of the 8th Global Literary Festival Noida in a grand function at Marwah Studios Film City Noida.

The event began with the festival president’s address. Dr. Sandeep Marwah announced that,” this is the first award to be coined after Late Prime Minister, Atal Bihari Vajpayee. The art and culture has never bothered to divide the society on the basis of caste, creed or religion, but have believed in only growth and entertainment,”. He motivated the people to have big dreams, huge goals and most importantly a great determination.

Dr. Neeraj A Sharma, Honorary Consul General The Republic of Palau extended his wishes and claimed the awardees to be assets to the country who contributed in society’s development by their work. He appreciated the efforts of ICMEI for creating Indo Palau Film and Cultural Forum to develop and promote relations between the two countries India & Palau.

Dr. Sergey Dvorianov, President International Diplomatic Club- Amicability of Russia, appreciated the Indian scriptures as he said,” No author can be compared to the writings of Ved Vyas’s Mahabharata and Valmiki’s Ramayana. We all must unite the inner and outer beauty to support humanity together. Indo Russia Film and Culture Forum is a wonderful initiative by ICMEI,” he emphasised.

Dr. Vinayshil Gautam author and academician stated, “sahitya ki atma hai apna anubhav”, teaching the students that every person has their own share of experiences in life. He said that the literary fest was an initiative which kept the soul of the society ignited.

The awardees spoke about Love, Peace and Unity in the society and how literature plays a vital role in the development of an individual. The Vote of thanks was proposed by the Festival Director Sushil Bharti. The event was supported by AAFT University, Asian Unity Alliance, International Chamber of Media and Entertainment Industry, Prithvi Yoga Centre, 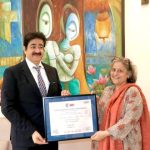 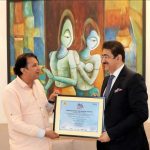 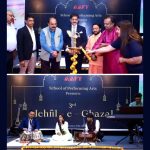