Award of Distinction to Slovak Film -The Cellar 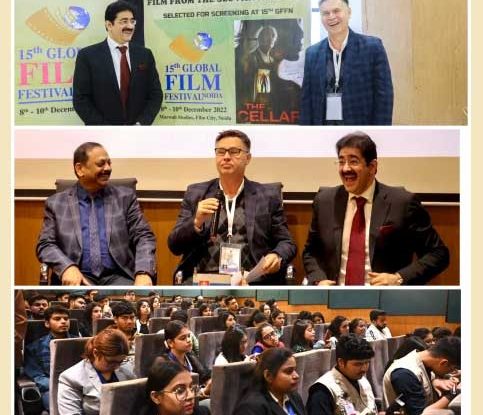 Noida: On the second day of the 15th Global Film Festival Noida, the screening of the movie “The Cellar” from Slovak was organised.  The session began with the address by Festival President Dr Sandeep Marwah, where he enlightened the audience about the Indo-Slovak relation and forum. He also shared how the two countries are building strong bonds through art and culture.

On this occasion, H E Robert Maxian, talked about the movie “The Cellar” and how it is a significant milestone in the evolution of the art, culture and cinema of Slovak. He elaborated how this movie strengthened relations among other countries. Followed by Screening of the film “The Cellar – a strong storyline composition that pierces into the depths of the soul of the audience”.

The story is about the marriage of Milan and Tana Labat is going through crisis. Discontent and vigorous Tana considers her husband, who avoids to resolve problems, a sissy. Their 16-year old daughter Lenka takes their alienation very hard. But one night during summer holidays will change their lives.

An Award of Distinction was announced for the Slovak film- The Cellar by the festival President Dr Sandeep Marwah, and handed over to H.E. Robert Maxian, the Ambassador of Slovak, present on the occasion.