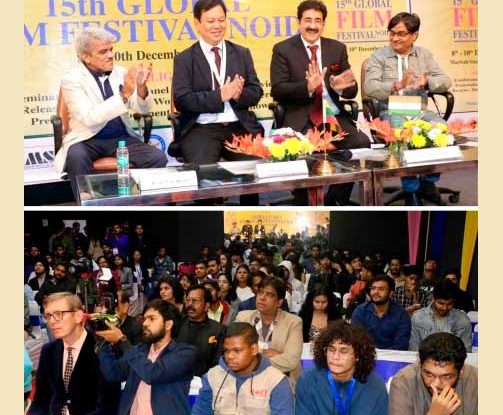 Noida: On the second day of the 15th Global Film Festival Noida, a film screening of the movie “The Attachment” from Myanmar was organised. The guest panel included Festival President Dr Sandeep Marwah, Renowned Actor Brijendra Kala, Rajan Sehgal Chairman at TAAI- (Travel Agents Association of India)  and the Ambassador of Myanmar to India HE Moe Kyaw Aung.

Addressing the gathering, Festival President Dr. Sandeep Marwah expressed his happiness regarding the Indo-Myanmar relations and forum and how it’s helping to build good relations between both the countries. He laid stress on the importance of film and cultural tourism and how that industry is flourishing with time. He said that two countries can definitely come together with the help of art and culture.

Rajan Sehgal said that Global Film Festival Noida is a great platform for all the students to be have a wider exposure and learn from the top-notch Industry professionals. Renowned actor Brijendra Kala said that events like these should keep going on even in the future. He also said that age does not and will never matter as long as one has the passion and will to learn and achieve something big. He shared some acting tips with the students of AAFT.

The Ambassador of Myanmar HE Moe Kyaw Aung mentioned about good cultural relations between India and Myanmar. He said that “film is a medium to promote people to people contact and understanding”. He also said that his country is very closely related to the Indian film industry and hence expressed his wish of inviting Indian filmmakers to produce films in Myanmar.

The award of distinction for the film “The Attachment” was presented by Dr. Sandeep Marwah to HE Moe Kyaw Aung alongside presentation of mementos to the esteemed guests. The event was coordinated by  Assistant Professor Ruhi  of AAFT School of Animation  and   Assistant Professor Niharika of AAFT School of PR Events & Advertising. The event was supported by International Film and Television Club, International Chamber of Media and Entertainment Industry, Asian Unity Alliance, World Peace Development and Research Foundation and Indo Myanmar Film and Culture Forum.