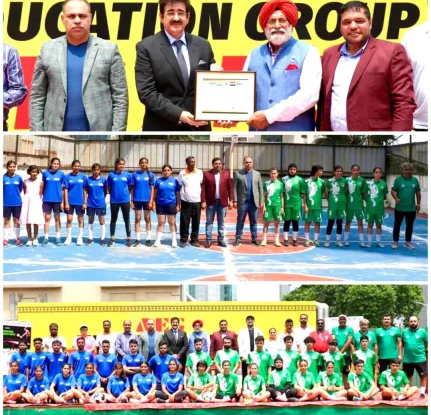 Noida: Indo Iraq Cultural Forum in association Footvolley Association of India organized friendly matches with the team of Iraq on their visit to India under the leadership of Dr. Sandeep Marwah Patron of the organization to bring love peace and unity between the two countries at Marwah studios complex 2 at Noida.

“Sports and games are the best way to raise the level of friendship. Not only it keeps you fit and healthy but also inculcate sportsmanship within you. Dr. Marwah is the cultural Ambassador of India and his contribution in developing relations with large number of countries cannot be ignored. I congratulate both the teams and wish then wonderful matches,” said Gen J.J. Singh former Chief of the Army Staff.

“We are very excited and charged with new energy by organizing these matches. These matches have brought two countries close to each other,” said Ram Avtar President of Footvolley Association of India.

The twenty-three-member delegation of footvolley from Iraq was under the leadership of president of the organization Safa and Asad. India team was handled by Ram Avtar. The friendly matches covered international games like Footvolley, Student Football, Futnet also called Football Tennis and Teqball at the grounds of Asian Business School.

Dr. Lalitya Srivastava, Saurab Sharma & Gurdeep Singh of Asian Education Group, Nixon Thotan  of GVNN TV from Goa, Arijit Bhatacharya of World Ledership Summit from Kolkata, Narender Sharma Social Worker, Illa Rani Sharma from Uttarakhand, Raman Raghunath from Tamil Nadu, A K Mohammad Ashraf from Kerala and Noel Josef from Maharashtra also joined from their states to be part of this international program. Later all the sportspersons were honored for their participation.

The event was supported by International Chamber of Media and Entertainment Industry, Asian Unity Alliance and World Peace Development and Research Foundation.