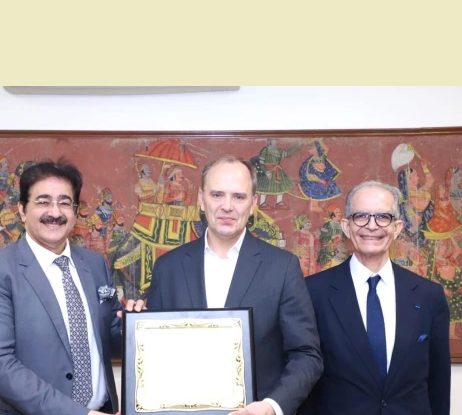 Noida:  Joshua Lincoln the descendant of Abraham Lincoln  from Boston USA is a Senior Fellow (non-residential) at the Centre for International Law and Governance at Fletcher, the Graduate School of Global Affairs, Tufts University visited Asian Education Group in Noida to deliver address on current issues in the World.

Between 2013 and 2019, Dr. Lincoln served as Secretary-General of the Bahá’í International Community.  In that role he represented the international governing council of the Bahá’í community in its external affairs; managed relations with governments, municipalities, universities and civil society; and developed multi-year programs and partnerships.

Between 2000 and 2013, he worked on global peace and security issues at the United Nations, including postings as Directeur de Cabinet to the Director-General of the UN Office at Geneva and as Senior Officer in the Executive Office of Secretary-General Ban Ki-moon in New York.  He also worked in mediation and preventive diplomacy with the UN Cameroon-Nigeria Mixed Commission and in UN peacekeeping and peacemaking field missions in Ethiopia/Eritrea and North/South Sudan.

Earlier, as an academic/policy researcher, he carried out projects for several universities and think tanks and the World Bank.  He holds a BSFS from Georgetown University in International Politics, and both a MALD and a PhD in International Relations from Tufts University.  He speaks fluent French and basic Arabic, Hebrew, and Spanish.

Later Dr. Sandeep Marwah honoured Joshua with the memento and  membership of International Business and Management Research Centre of Asian Education Group. The event was designed by Kazem Samandari and supported by International Chamber of Media and Entertainment Industry & Indo American Film and Cultural Forum.