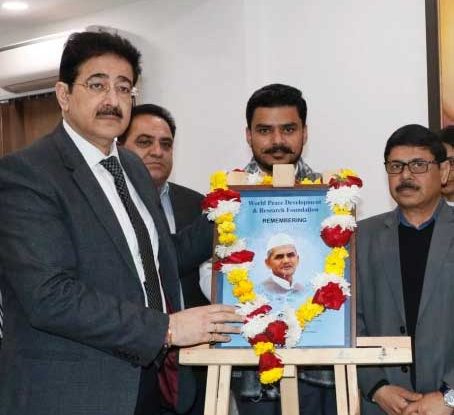 Noida: Today, the 11th January, is the Death Anniversary of Late Lal Bahadur Shastri, the former Prime Minister of India, and many powerful quotes, I am recollecting, said by him during his tenure as Prime Minister of India. The most famous was- Jai Jawan Jai Kisan,” said Dr. Sandeep Marwah President of Marwah Studios and Chancellor of AAFT University while garlanding the picture of late Prime minister at Marwah Studios.

He always emphasized on discipline. He said Discipline and united action are the real source of strength for the nation. He also said that I had always been feeling uncomfortable in my mind about giving advice to others and not acting upon it myself. He expressed that You have to fight to reach your dream. You have to sacrifice and work hard for it.

Lal Bahadur Shastri served as the second Prime Minister of India from 1964 to 1966. He passed away on January 11, 1966 in Tashkent, Uzbekistan (then Soviet Union), a day after signing a peace treaty with Pakistan to end the 1965 Indo-Pakistan war.

A prayer meeting was organised by  AAFT School of Performing Arts in the campus of Marwah Studios to pay tribute to one of the most acceptable and loveable Prime Ministers of India. The event was supported by World Peace Development and Research Foundation.