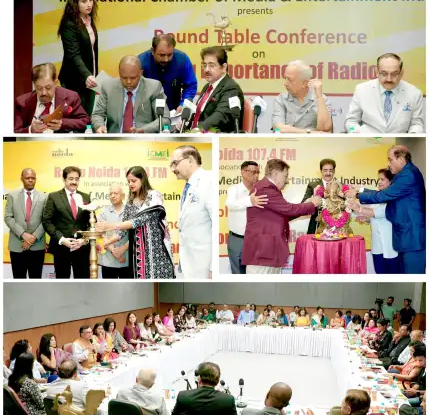 New Delhi: The management of Radio Noida 107.4 Mhz conducted a round table conference on the subject ‘Rising Importance of Radio’ on 9th August 2022 at Marwah Studios Noida Film City. Large number of prominent people from all strata of life attended the same.

“The purpose of the round table conference is to create more awareness about the community radio stations and their application in relation to the people of community,” expressed Dr. Sandeep Marwah President of Radio Noida. “It is a matter of great pride for all of us that Radio Noida 107.4Mhz has been nominated and declared as one of the best radio stations of the country,” added Dr. Marwah.

“The conference covered many different segments related to Radio Station and Radio Programming including modalities to run a radio station, the software for the radio, government’s involvement and benefits of community radio, the range for the stations, Promotion of Indian art and culture, involvement of students and people from the society, etc.