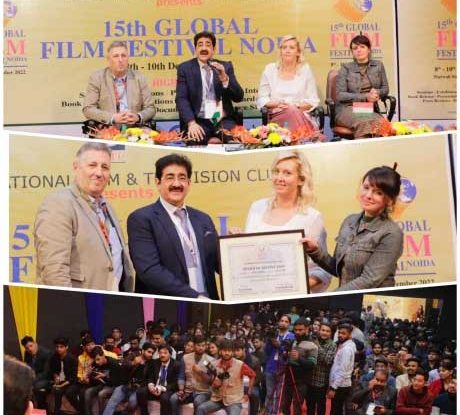 Noida: The 15th Global Film Festival was well received by the audience from all over India and abroad. Every film was screened before the full house of film lovers. Hungarian film Apro Medek-Tall Tales was well appreciated by the film makers and film goers on the first day of the festival.

“Hungarian has had a notable cinema industry since the beginning of the 20th century, including Hungarians  who affected the world of motion pictures both within and beyond the country’s borders. The former could be characterized by directors Istvan Szabo, Bela Tarr, or Miklos Jancso  the latter by William Fox and Adolph Zukor,  the founders of Fox Studios and Paramount Pictures  respectively, or Alexander Korda,  who played a leading role in the early period of British cinema. . Examples of successful Hungarian films include Merry go Round, Mephisto, Werckmeister Harmonies and Kontroll,” informed Sandeep Marwah President of Marwah Studios and Chair for Indo Hungarian Film and Cultural Forum.

“In the rubble and ruin of war’s aftermath, an opportunistic con man named Balász pretends to be a close friend of soldiers killed in the war and insinuate his way into their families and their bank accounts. It’s a dangerous game and gets him into such serious trouble he must flee Budapest to save his skin. When he is given shelter in a remote forest by a woman named Judit and her son, Balász’s con man trickery fades as he finds himself falling in love. Things go well in their passionate affair until Judit’s brutish husband returns home from the front,” story of Tall Tales was narrated by Dr Mariann Erdo Cultural Counselor Embassy of Hungary.